#158812  by zambiland
Thu Nov 02, 2017 11:31 pm
It sounds like Phil has an octaver going on. What's up with that? If you listen in headphones, the bass comes from several different parts of the stereo field, so it seems like the quad was in effect, or perhaps the two main pickups were going to different amps.

I sincerely hope that it's not a mastering attempt to provide low end to the recording, but it doesn't seem to affect the kick drum.

Anyone else have this recording?

I haven't heard it yet as when I opened mine the 2nd disc was missing, so I'm waiting on my replacement. Dead.net was cool about it, and ordered a new copy right away.

#158824  by zambiland
Fri Nov 03, 2017 2:36 pm
All of them. There's a big discussion about this on Stevehoffman.tv. Apparently Jeffrey Norman admittedly did it as an experiment to provide more oomph, but I think it completely messes with the tone of Big Brown. Maybe it's just because I'm a bass player who plays a Starfire, but it does not represent the tone as Phil played it or intended it. A better option would have been an EQ or perhaps a multi band compressor/expander.

Jeffrey asked that I pass along his last two emails. For context my first email was basically my earlier post on my listening notes abridged to take out the non-listening bits; that and I added that responses about the low end were pretty even on this thread along with it being pretty well liked on Dead.net, and provided about four of @Archtop’s comments in the thread that I thought would be on point to what a well versed musician bass player heard with no prompting. Here were his responses less some salutations.

“As always, thank you for your thoughtful comments. Man oh man, I really got a controversy going didn’t I? As I was working on DPv24 I had no idea I would be creating a problem for some people. I did indeed add some low end that was not in the original two track, all because I just wasn’t getting the power from Phil’s bass that I felt it deserved. I thought I was enhancing the performance and now I see to some I was in a way altering it (excellent observations by the bass player; is that @Crispy Rob?), and that is not what I intended.

‘normally delivered in the manner of a well-born Englishman— the product of an Eton Cambridge man—having a lyrical, fine and sophisticated quality; this has the effect of making it a bit cockney.’

That’s a great way to describe it! In any case, I apologize to all those out there that were offended or unhappy, I respect those many excellent ears in your forum and want to do well for them. I’m starting work on DPv26, and it will sound great and the bass off the tape is strong. Unfortunately I also felt there was a bass problem on DPv25, so I’ll probably get more complaints when it comes out! However in the future I won’t be altering, I’ll hopefully be only enhancing!”

Next for some more context, in my reply I pointed out such things as no not a huge controversy; we appreciate his thoughts and that he gives ours a listen; I pointed out the bass player was @Archtop, and that on the forum Archtop is a verb and I tried to lay a nice Archtop on him… (I was a little pressed for time so searched for dorian via @Archtop and laid the 2nd and 3rd paragraphs after the jump from this post The Grateful Thread ). He replied…

“ ’we especially appreciate that you are listening to us and making us feel like we are all in it together.’

Hey I’m very conscience of you guys, and even though I don’t subscribe to the forum, it’s very important to me that in general you in the group like what I’m doing (you can’t please everyone). I appreciate our emails as you’ve become their unofficial spokesperson and that’s a good thing. Sometimes it’s takes awhile for me to respond, and although I’m not trying to discourage communication, if I had to answer a bunch of emails I’d probably never get to any. In any case, I figure if I can please you guys, the true “picky Deadheads”, I’m heading in the right direction. It was good for me to hear back about this DPv24, I realize I was getting a little off-track in my goal to have it sound great but be invisible in the process.

I love those Archtop comments. I’ll pass them on to my son who is an amateur musician and a jazz fan, he’ll love ‘em. thanks again, Jeffrey

once again, please pass on my response (this one and the last one) to the group.”

With that I sent a hearty thanks and of course an invitation that his son should join the fun on SHF with its plenty of jazz fans and experts.

If you have a history with any type of octave effect, your ears should have the muscle memory to pick it out. It seems to occur for only seconds at a time / Kinda flies in and out. It's like if phil's frequency hits a certain peak of range, the "low end addition" effect kicks in. I'm sure at some point in the near future someone will post the songs and time stamps where it is most egregious. Seems to remember hearing it here and there on Black Peter.

I've also been following the discussion on stevehoffman.tv about it. Sure, it's a bit of a bummer, but I'm not quite as exercised about it as some appear to be. I'll take what they give me. Tapes are 45 years old, ravages of time and all that. I'm feeling lucky that we get em at all! I'm assuming that goosing the low end was a necessary evil as the original mix was just not up to the task. Just a shame that in the process it likely changed what Phil actually played that night. I really hope they can find another way to add low end without the unwanted octave effect.

Maybe next time, Mr. Norman can invite me over so I can lend my ears to the process. I'm just across town

#159246  by wisconsindead
Fri Dec 08, 2017 2:25 pm
Holy shit. I hadn't looked into this. How could Jeff have thought this was ok? He totally changed the tonal character of the bass! Glad I didn't purchase this release. And its a shame because this is from my favorite era of dead, and my favorite era of Phil. WTF!?!

#159247  by wisconsindead
Fri Dec 08, 2017 2:25 pm
Holy shit. I hadn't looked into this. How could Jeff have thought this was ok? He totally changed the tonal character of the bass! Glad I didn't purchase this release. And its a shame because this is from my favorite era of dead, and my favorite era of Phil. WTF!?!


Among other things, Keith's piano sounds so much better on this original transfer. This is an era of the band that is primo... Recordings and mixes varied from night to night. This one is originally so well balanced and excellent which makes the Dave's Picks 24 mix and EQ that much more offensive...
"It all rolls into one..." 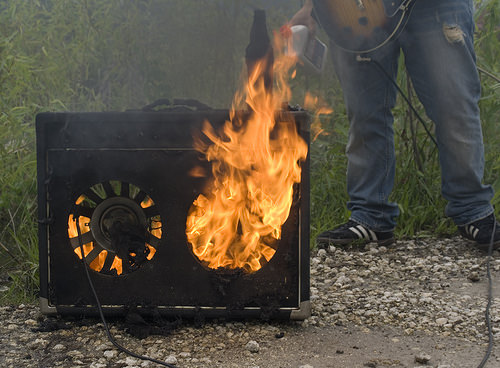