I thought he played very well, they all did, a few flubs here and there. Phil looks really thin and frail but he was playing like a monster. Highlights, for me, were a nicely played Weather Report Suite to open the second set -- couple of flubs but great jams, the Passenger -> Crazy Fingers opener (I knew the Crazy Fingers was coming because I saw the woman who signs for the deaf reviewing the lyrics right before showtime), and the Miracle -> Wang Dang Doodle. I thought the Black Peter let all the air right out of the crowd and I could've lived without the slide solo on it, and I don't know why they play the bridge twice on it now. The coda at the end of GDTRFB was amusing, JK started playing the riff just as Russo when back into NFA, so they just played the coda to the NFA beat, which was interesting. JK was pretty on last night and took more of a lead role than I have seen in the past. Phil was fairly subdued, just stepping back by his rig and playing most of the time, not too many spoken instructions into the monitors, and he barely sang at all.

Things you notice from the front row:

Robbie Taylor takes good care of Phil ... he's constantly refilling Phil's red water cup and he also protects him from errant balloons and giant beach balls that the cooling fans were sailing toward him when they made it over the monitors

Phil's wristband reads "CODY" ... in honor of the donor whose liver saved Phil's life. Not sure what speakers he was playing through, could be Meyers.

How the heck does Russo play drums with flip-flops on? Maybe he kicks them off. He also has an amazing right foot, I have never seen someone playing constant eighth-notes with a high-hat pedal like that before.

If you look closely at Phil's rack you can watch his tuner indicate what note he is playing at any given moment.

JK threw the Alembic over to the neck pickup and got a nice fat tone out of it in a couple spots; he also had it quacking in the 2nd position for a bit during Sugaree. If you watch his rack, you can see how many effects are active on his GCX. His Carvin seems to be the backup guitar at the moment.

The speakers at the edge of the stage for front-of-house fill are Meyer MILOs, and they are frigging LOUD.

Couple shots ... I would have brought a real camera had I known I could just walk in with it. Hard to take sharp photos with a phone camera under stage lighting, even from 10 feet away. 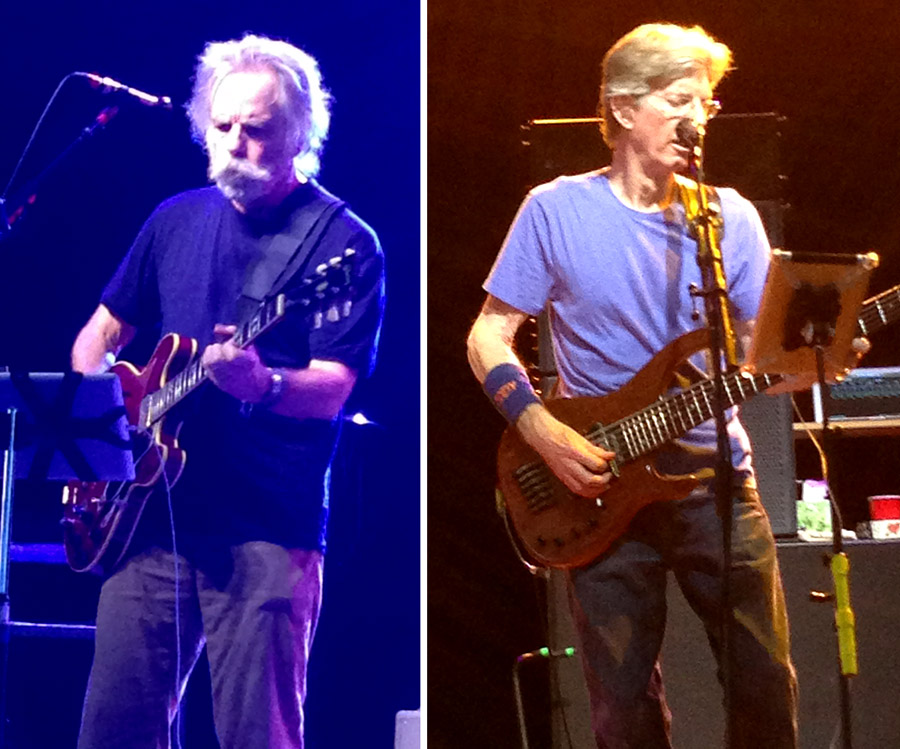 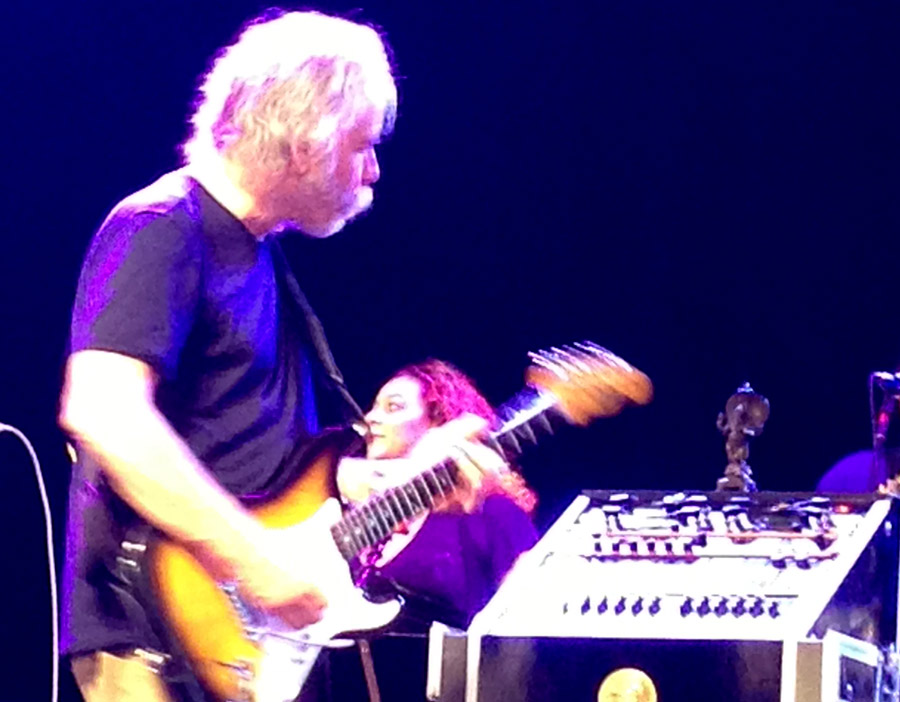 #130405  by zambiland
Fri Jul 19, 2013 5:52 pm
Phil's rig is a Meyer system. It's pretty new. If you want to know more about it specifically, look up Mike Gordon's video from last NYE where he discusses it. It's basically the same rig, when it comes to speakers.

Yes, Joey's feet are amazing. He was like that when we used to jam in the 90s. He got into this whole thing of being able to do crazy-ass electronica drum machine beats with real drums. It was pretty amazing. If you told me back then he'd be playing with Phil and Bobby now, I'd have asked that you share what you were smoking.