#124262  by barefootdave
Thu Feb 07, 2013 3:19 am
My Jerry presets come from simply using the speaker simulations I got from Vic And applying those to some twin and deluxe reverb models. He was actually kind enough to send me the cabinet models he made from his K110 and E120's. I was thinking about buying those cabinets from him.

I initially wanted all the presets as well, but have found Vic's advice to be true. Much of the fun is in building your own presets, and one learns quite a bit from modifying the patches. I understand more now about the way amps work than I ever did before I got this unit, and I have barely scratched the surface yet. I may still use my faithful Dr. Z amp with the new country show band I am working on, but the more I use my fractal, the more I think not. It does everything from Jerry Garcia, to Lynyrd Skynyrd, to ZZ Top, to straight acoustic, and does it all extremely well.

Jump in when you're ready, the water is fine.
Barefoot Dave
"His job is to shed light, not to master"

jeager wrote:Ok so I am about to pull the trigger on this thing and it is crazy cause I love my current rig SMS Mesa power amp and jbl k120. In fact I just got my pedal board all worked out... The thing that keeps pushing me here is the versatility and the portability. I love the idea of creating a few patches to cover a few of Jerry's set ups and adding effects he never used along with sounds he did use... And also use it as my acoustic rig ... And also minimize the number of patch cords I need ....

Questions, and this is what holds me back ... Dependability?

Other question, will you guys help me with a good Jerry preset?

Also, does anyone have any IDEa where we could get recordings of Jerry isolated from the band to use for tone matching? 70s and 80s...?

I've probably done at least 100 gigs with it since 2009 and have never had a problem. I'd call that dependable. However, it's wise to keep a backup, which is why I carry a Crate Power Block, a Holy Grail, Q-Tron and Boss OD-2r that have never been used. Actually, the Crate got used once ... when my Twin Reverb head went down at a show in 2006.

Are you buying the AxeII or an older model? I own both, but use the Ultra with the band and have never re-created my sound on the II. But if you start with the "double reverb" (Twin) preset, set the tone controls appropriately, crank up the presence, add some "vintage" reverb, and use the JBL speaker IRs I created, you are most of the way there.

If I gave you the preset I use you would still have to tailor it to your specific guitar, unless you have the same electronics as I do. The preset doesn't sound good with a regular Strat or other guitars I've tried it with..

I don't think the Tone Match feature is the way to go about this, personally. But I haven't messed with it much, either.

Here's Jerry's solo from Touch of Grey isolated (circa 1986).

And here's my guitar through the Ultra.

#124268  by drdead
Thu Feb 07, 2013 6:38 am
Vic
Thanks for answering my newb questions. Last 2 things. Is there a place to find and download your jbl ir's? Lastly I mostly do the weir stuff with our band, have you or anyone else used the axe 2 to get a good weir tone, sorry I know this is posted on jerry tone. Thanks in advance!
Jonas

Frankly, there isn't a guitar tone in the world that's not in there somewhere.

Post your email address and tell me which AxeFX you are using and I'll get the IRs to you.
*****
Check out my original record at http://vicderobertis.com
or https://itunes.apple.com/us/album/crook ... d978388845
http://leftyguitarsonly.com
http://www.playingdead.net

#124321  by jeager
Fri Feb 08, 2013 9:20 am
Thanks Vic ... Prob gonna hold off now for a few more months but I'm figure to get the II... I'm very drawn to the versatility but its a big investment along with monitors and all. I'm using a jerrified strt put together by Andew Olson btw... It's got the Waldo buffer and super II in the middle. Not spot on tiger but gets in the zone enough for me... chambered swamp ash hard tail body so it doesnt weigh half a ton or have unnecessary hardware...there are advantages to not being a purist.
Last edited by jeager on Fri Feb 08, 2013 11:33 am, edited 1 time in total.
"One man gathers what another man spills..."

#125529  by drdead
Fri Mar 15, 2013 8:57 am
So I am running my axe fx thru the frfr speaker no problem, have the ground control pro, but the manual seems not the most intuitive, how do I get the 2 to talk to each, and begin to assign patches. I have a midi cable running form the gcp to the axe fx into the midi in section. The axe forum had some videos linked but have been taken down. The manual only seems to talk about the MFC controller. Any help is appreciated!

#125547  by playingdead
Sat Mar 16, 2013 5:16 am
It is a bit of a bear to get it working but it will work ... it's been too long since I messed with mine to remember the details but the basics are make sure the AxeFX and the Ground Control Pro are sending and receiving on the same channel. Then set the GCP so you have the four presets on the bottom row and the eight loop switches are then each set to the corresponding MIDI CC# for each effects block in the AxeFX that you want to control. It can be to bypass the overdrive, it can be a tap tempo, whatever you want.

Mine is set, from 1-8, for envelope, octave, phaser, overdrive, wah, +6db boost, delay and tap tempo. Pedal 1 is set to a value that I used in the AxeFX patches to set delay level and phaser rate. It also controls the sweep on the wah patch.

Others may have done this more recently ... it's been years for me and I have never had to change anything on it. The GCP manual is pretty cryptic, but that's where you have to do the programming, not so much on the AxeFX.
*****
Check out my original record at http://vicderobertis.com
or https://itunes.apple.com/us/album/crook ... d978388845
http://leftyguitarsonly.com
http://www.playingdead.net

#125549  by drdead
Sat Mar 16, 2013 7:58 am
Thanks VIc!
I figured it out, you have to go to I/O on the front control and page over to MIDI, then dial in midi channel to "OMNI". Not very intuitive. The voodoo labs website that shows how to set up the GCP with the eleven rack and axe fx seems analagous to this. Thanks for the help, ready to get this thing dialed in!

#125553  by playingdead
Sat Mar 16, 2013 10:55 am
That's one way to do it, just be aware that Omni mode means it will respond to messages on any MIDI channel, which can problematic if you are using other MIDI devices in your rig, like other rack effects or switchers that you may also want to control from the GCX. But if your only MIDI cable runs from the AxeFX to the GCP, it's fine.
*****
Check out my original record at http://vicderobertis.com
or https://itunes.apple.com/us/album/crook ... d978388845
http://leftyguitarsonly.com
http://www.playingdead.net

#125897  by drdead
Tue Mar 19, 2013 9:01 am
So I've had a few hours to kill while at work, so looking rather studious I have been going through the axe fx manual, and one thing I'm having trouble with in the effects gamut is coming up with a decent envelope filter. Anyone have a patch or something that has worked well for them. Thanks in advance!

#126259  by playingdead
Fri Mar 29, 2013 5:40 pm
This will take some tweaking, no doubt ... I had posted an effects block with just the envelope filter a while back but it purged when we redesigned the band's website. I don't have my AxeFX speaking to my Mac right now but was able to open it in AxeEdit so here are three screen shots of how it's set up.

First off, I run a flat (null) filter block right at the start of my effects loop to push the signal up 17.5 dB before it hits the envelope, so you may have to boost yours (or not).

An envelope filter is just a wah wah pedal that uses the envelope (how hard you are picking) to control the position of the "pedal."

Here are settings for that boost filter: 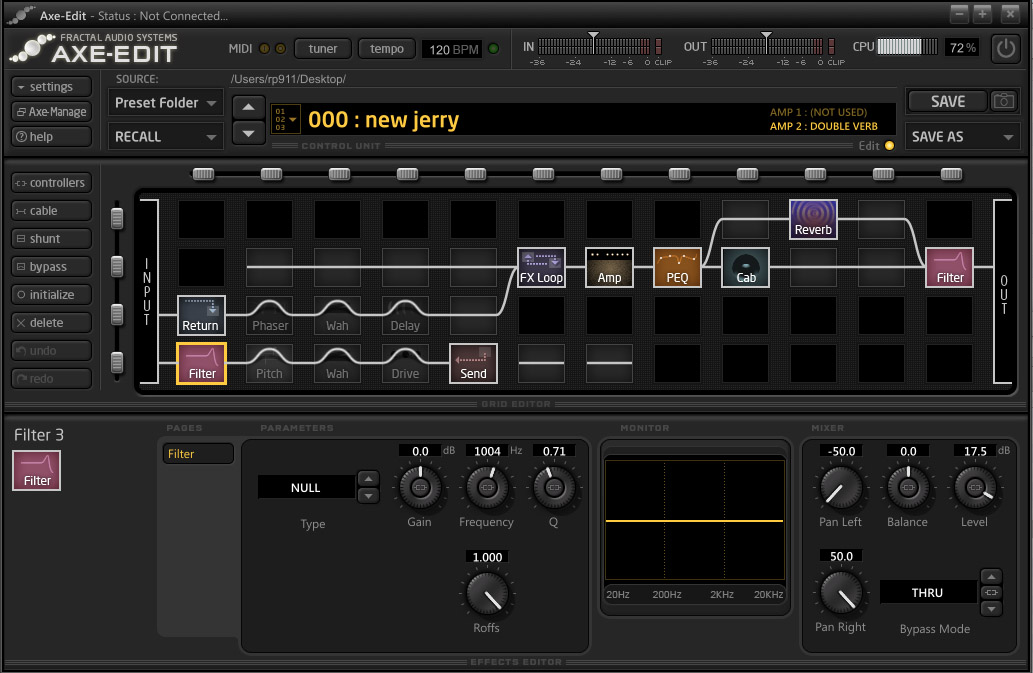 These are the settings for the wah block that serves as the envelope filter. Note the frequency is tied to a modifier (golden icon in the middle of the knob): 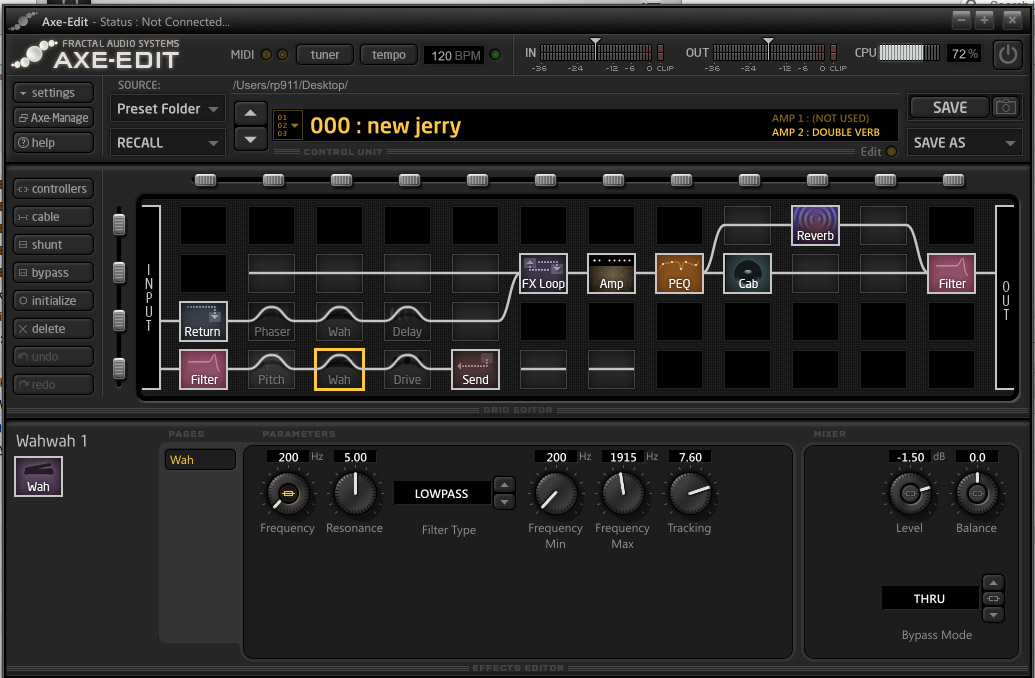 These are the settings I use for the envelope modifier: 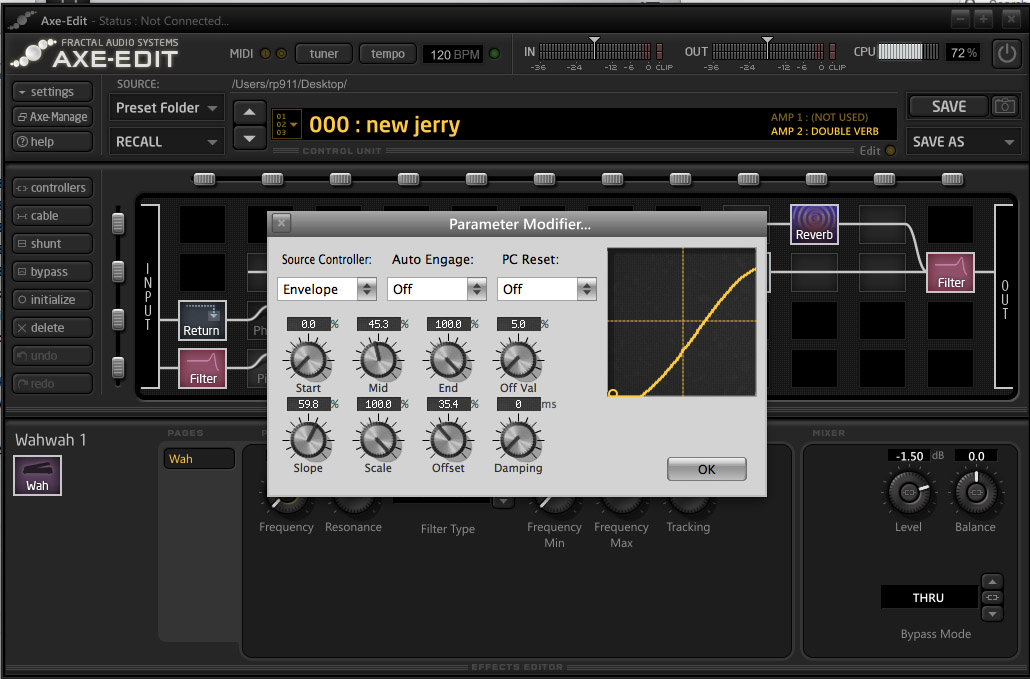 Adjusting that curve for the envelope modifier makes a big difference, as does the tracking on the wah block. These will have to be adjusted to taste for your particular guitar.

If my memory is correct, I set up the minimum and maximum frequencies to be approximately what the Mutron is and then adjusted from there. This is key ... the minimum is how "low" the sound will be when the filter is closed, and the maximum is how "high" when it's open all the way. These are like the sweep of a wah pedal, you are just setting the low where the pedal's down all the way and the high when it's up all the way. The curve determines where your pick attack will be between those two frequencies. Tracking fine tunes that further.

Hope that's helpful. This is done on an AxeFX Ultra; I have not tried to set it up on II because I have the Ultra dialed in and still use that on stage.

How does one get a preset loaded onto the Axe-fx from one's computer? Do you have to use Axe-Edit?
If so, it is currently unavailable until the new version comes out (which has been promised for months).
Crazy oTTo: http://www.facebook.com/pages/Crazy-oTT ... 511?ref=ts