Eyesoftheworld wrote:I was wondering if you guys can help on what others equipment to get to finsh out the Garcia tone. Expensive and inexpensive ideas are welcome, thank you in advance.

I think the foot controller that Fractal makes is essential, there are other on the market but the Fractal unit has more options and is easier to work with. Be sure to get a Cat5 cable to power it and a few Mission expression pedals for Wah (w/ switch), Volume, etc. I play through a QSC K12 on a Tripod and love the sound but some guys on the forums prefer Atomic amps and cabs.

The only part of the Axe I can't get quite right is a Mu-Tron effect and have considered using an outboard analog pedal. There is an effects loop in the Axe but you could also use the Voodoo Labs rack switcher if you wanted to go further.

Of course the guitar matters. A decent Strat into the Twin Reverb model w/ d120's will get you pretty close, especially if you're chasing an early 70's tone. Anything more and you're going down the rabbit hole but that's another thread.

I've got a k12. Still in the courting stage. About half the time I play through my 2x12 birch can with the cab sim off and use a vintage BWG power amp which was a small investment compared to the K12 considering I already had the cab from my analog rig.

I did a gig last weekend where I could not get to my rehearsal space in time to pick up my fractal and used my Blues Deluxe. It was one of those gigs where we needed the stage volume low. My amp stayed at 1.5 and I really missed the Fractal where I could have had unlimited tones at that super low stage volume, and everyone's amp was mic'd.

Once you enter the rabbit hole there is no turning back!

gmchart wrote:I was born with an analog brain so I'm way outta my league here, but I do have a question. Has anybody tried replacing the speaker in their powered monitor with a JBL?

The powered monitors are full-range, with a woofer and a tweeter ... putting a JBL in there would only prevent it from having the flat, linear response that you want using this sort of technology.

A JBL has a given frequency curve and response that shapes the sound of whatever is playing through it -- with a sharp roll off on the high frequencies -- this is why PA speakers are two or three way speakers, a large speaker does not reproduce high frequencies well.

These frequency curves are quantifiable by taking what is called an "impulse response" measurement of the speaker. The speaker is miked, and a test tone from an inaudible low frequency that cycles quickly up to an inaudible high frequency and then back down is played through it. The resulting curve is "convolved" into an impulse response file that is applied digitally to the guitar. When that is amplified through a flat response full range speaker, you have the sound of the guitar coming through the original JBL.

I did that process on my own Hard Truckers cabinet with JBL E-120s, and I use that file in my preset on the AxeFX. It's close. It does not reproduce what you might hear with a big power amp pushing four E-120s very hard, but it does get the basic tone and it is playable at any volume, from bedroom level to deafening, with identical results.

Here is a comparison between a QSC K12 and a JBL E120 frequency curve. The QSC is on the top ... note how the JBL's curve falls off sharply before you reach the high frequencies. The basics of the IR technology is to apply that curve to the sound of the guitar, and then play that curve over the speaker with the wider response to get a similar result. 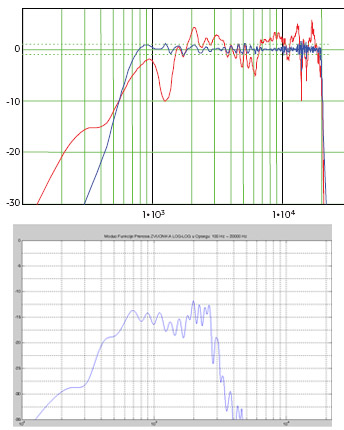 ... and here's what it sounded like recorded through an E120 miked from 2 inches away.

You can hear how different it sounds, some of that metallic zing of the JBL, and the lowering of the highs.

These files may freak out your dog

#134603  by playingdead
Sun Dec 01, 2013 10:21 am
To really hear the difference in a live setting, at a gig back in 09 I turned off the JBL cabinet block on my AxeFx just for Peggy-o. This is the sound of the guitar as if it were played through a full-range speaker with no cabinet. Reminds me very much of Jerry's thin and spindly 94-95 Bolt tone when the speaker cabinets were removed from the stage. As we all know, when he played the Bolt through the JBLs at the JGB gigs, the old fat tone was back.

But an example how the speaker really shapes the guitar tone.

Weir, circa 88 or so, was playing his Modulus through the Meyer cabinets and had that sort of full-range sound too, for a while. I liked it on his guitar ... on Jerry's, not so much.
*****
Check out my original record at http://vicderobertis.com
or https://itunes.apple.com/us/album/crook ... d978388845
http://leftyguitarsonly.com
http://www.playingdead.net

I am still on the fence about the AxeFX 2. Or should I say standing at the edge of the rabbit hole hehe.

Right now I am using a Fender Mustang 3 with the follow settings:
Amp - 65 Twin:
gain 4, vol 7,treb 5, mid 8, bass 4 and reverb 3.5
with a cab of 4 x 12s
No don't forget this is all in the modeling of the amp.
for effects in the preset I put a tape delay with just a little bit of delay just enough to fill it out. and this effect is put before the amp.
after the amp and looped back in is a fender 65 spring verb.

I am happy with the sound its almost like a 70's sound I think hehe.

For floor pedals I am using 2 Wampler pedals A Tweed 57 and a Brad Paisley overdrive. I also use a Q-Tron. I have an old MXR Dist + pedal that I might trade out the Paisley for or just add and play with sounds.

This works pretty good for me but i feel like I am a few steps to my ahha moment for my Jerry sound. This is the reason I am looking at the AxeFX 2 because of it flex compared to modeling amps. If I do go with this device Do I need to go to a amp before going to a speaker cab or can it go straight in. Also, I didn't see it on the site or was blind hehe, but is there a foot switch for the Axe?

Vic I like your sound if I can get close to that in my own way would be great. I think I am ready to jump in the Rabbit Hole and start having more fun.

WHat type of amp do you recomend and is there anybody you know who builds speaker cabs. Think I would go with 2 x 12.

I hope I got my question out there I am new at learning about this device and its hard to ask the right question I guess hehe.

Thank you in advance all

Eyesoftheworld wrote:If I do go with this device Do I need to go to a amp before going to a speaker cab or can it go straight in. Also, I didn't see it on the site or was blind hehe, but is there a foot switch for the Axe?

To get the most out of the AxeFX, it's best to go with full-range speakers -- I use the QSC K12 -- so you can take advantage of all the different speakers and cabinets that are out there for sampling. By using it just as a preamp, and playing through another power amp and conventional speaker cabinet, you are limiting the possibilities. If you wind up playing it through a pair of E-120s in a 2X12 cabinet, you can get a good Garcia sound ... but if you go full-range you can get that with an IR, and also be able to play through a 4X12 with Celestions, a 1X15, even a 6X9 ... many different possibilities for tones outside the GD world. Just my opinion there.

Fractal does offer a foot controller for it ... I have been happy enough with the Ground Control Pro that I've had for years.

#135362  by cripeowner
Sun Jan 05, 2014 4:24 pm
For playing live I still use an amp and speaker for many reason mostly the lack of a quality sound man and the personal need to move air. For recording and any music other than Dead related it is the only pre amp I use. It offers so many options and different sounds which makes each recording unique instead of every track sort of sounding the same. Also I can record while other people are in the room and talking because it is direct and no mic picking up ambient noise. It is not the end all and be all for me, but if I only had $2 k to spend on a rig the Axe fx would be my first choice.

#135417  by cripeowner
Tue Jan 07, 2014 1:24 pm
I have offered Cliff at Fractal my E120s and K120s to IR because I don't live far from their shop and they repaired my unit for no charge. If he takes me up on I will get the file from them and pass it on. From most of the artist and videos I see from AXE FX users I'm not sure Cliff would consider these in high demand, but you never know.

Also are you saying that you can use the Axe FX by itself? It doesn't need to go to a power amp? I can just run it to a speaker Cab?

sorry I am a noob when it comes to this stuff hehe.