"Think of these two major scale shapes: the C major scale on the 1st through 3rd and then the C major on the 5th through 8th frets. Pretty much 90% of Jerry's playing in those shapes. Now, move through the progression moving the scale with the chord, for example:

- and there you have it, the basic structure of the Touch of Grey solo. "


What does he mean by "C major scale on the 1st through 3rd and then the C major on the 5th through 8th frets"? Since it refers
to scale shapes, I am understanding this as the "boxes" of the scale, like these:

But "1st through 3rd fret" gives me the idea of playing the scale horizontally across the fretboard. 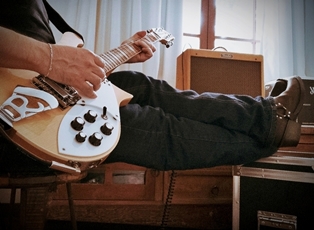