#111557  by mkaufman
Fri Mar 23, 2012 7:19 pm
Hasselberger is the man who worked with Weir to develop Weir's Ibanez guitars. He also was instrumental, with the Dead's input, in the development of the Ibanez multi-effects units.

#111558  by mkaufman
Fri Mar 23, 2012 7:22 pm
Folks: this is NOT the Ibanez prototype made for Jerry. This is one of the three Ibanez MC5000's ever made. Jerry's prototype Ibanez Musician is pictured on page 74 of The Untold Story and is the same guitar that Jerry is shown playing here: 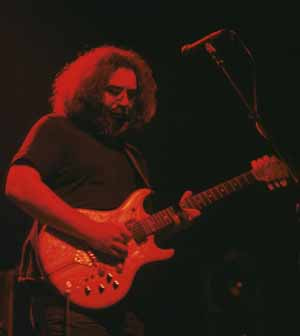 This auction is a total misrepresentation and should be stopped!

Scroll down and you'll see another one here:

I'm not sure who owns the 3rd one.

But what about Weir's supposed validation?

http://www.mr-ibanez.com/products_and_services.htm - cool link, i find myself more and more attracted to these vintage Ibanezeseses. BUT if I had a time machine, I might use it to prevent the production of any double neck guitars.

#111562  by broesau
Fri Mar 23, 2012 9:53 pm
Do you have a picture of the one from the Ibanez book? As many times as I've seen that picture of Jerry playing the Ibanez I've never noticed that 4th EQ knob, at least that's what it looks like. I agree that this is one of the 3 MC5000, but I can see how it could be made for Jerry with the OBEL and the scalloped nut.

#111585  by mkaufman
Sat Mar 24, 2012 11:09 am
Here's the pic of Jerry's Musician from The Untold Story. It has a special Jerry Garcia neck inlay. Actually, Jerry's has an extra knob. I wonder if it's the same guitar what was modded afterwards?

I can see how it could be made for Jerry with the OBEL and the scalloped nut.

the MC5000 pictured in mkaufmann's Mr. Ibanez link has the OBEL-associated jack, so perhaps that's "standard" for all three MC5000's ... too low-res to tell about he nut.

I've just gotta get into the downstairs of the (Portland's) Roseland Ballroom sometime soon, and snap a capture that 8x10 photo hanging on the wall from 6/25/78. Been about 7-8 years since I've seen a show there... any Portlanders headed there soon? Bring your camera and find that photo in the downstairs bar.

Mike K, what's The Untold Story, an Ibanez historical book?
"There, in huge black letters, was 'The Grateful Dead'. It just... cancelled my mind out."-Garcia

Yes, it is. It has lots of pic and information, not all of which is correct! it can be found on eBay. It was in included with every Cowboy purchase.

#111737  by jeffm725
Tue Mar 27, 2012 12:28 pm
I have no doubt that this guitar was made for Jerry. Was it the one he played live a few times? No. But this guitar was absolutely designed with jerry in mind. Even Orval who owns one of the 3 calls it the "Jerry Garcia guitar". Jerry didnt play it live for whatever reason, who knows, maybe he didnt like how busy the fretboard and headstock were compared to the one he DID play.I even mentioned this in my post about the auction last week: I wonder if this will be the Ibabez he played onstage or the one with the Ornate fretboard". Well we got our answer: its the one with the Ornate fretboard.

Bobby's wording may not be 100% historically correct, but I don't see anything glaring. I have no doubt that this was an Ibanez designed for Jerry, the auction is not misleading, it is not claiming it was "stage played".If you make one, why not 2 or 3?